Blueberries and Beets for the win

I don't know about you but when I see a deep red smoothie, I can't help but think of it as a total micronutrient bomb. Depending on what gave it that color, it could be packed full of berries or a load of beetroot (or both). If it's more one than the other, the taste might take some getting used to, but either way, it'll be packed full of the good stuff.

For kids, it's much easier to get used to unusual flavors since they have no reason to think they are unusual. And when you're working on getting some variety in their diets, a bright red smoothie with a load of beetroot could be just the thing to get them interested.

Beets are a good source of iron and a great source of folate and manganese. They contain special compounds called betalains that have antioxidant and anti-inflammatory properties so they are really good for you and your kids in the winter months to prevent and/or treat colds. Their intensive red color can lead to reddish stools and urine though so don't get scared if you notice this.

Blueberries are a Creative Nourish favorite ingredient. Not only because they are so easy to prepare but also because of their great nutritional benefits. They are one of the best antioxidants to be found and also have special nutrients that can help prevent a spike in blood sugar and therefore lead to prolonged satiety (so your child's not asking for food again 5 minutes later). They also contain a fair amount of vitamin C which can help the absorption of iron from the beets.

Cinnamon, although added in small amounts, has great nutritional benefits. It has shown to lower blood sugar and help prevent certain cardiovascular diseases.

Prep couldn't be easier for smoothies – just combine the ingredients in a blender and away you go. However, given this recipe uses raw beets, a more powerful blender might be preferable. We've never had trouble with the Magic Bullet though.

When buying cinnamon, look for Ceylon ideally – this is the original and "true" cinnamon.

As much or as little water can be added depending on how you (or your child) like your smoothies. However, because of the beets, you might need more than normal for this smoothie.

Just make sure you give it a shake before drinking – otherwise, you might have some beetroot floating to the top. 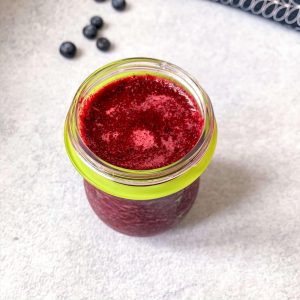 How often do you make beets? Do you know why they are such a great food? Making a bright red smoothie is a great way for them to look and taste great.
5 from 1 vote
Author: Dora
Print Recipe Pin Recipe
Prep Time 5 mins
Cook Time 0 mins
Total Time 5 mins
Servings 1 serving
Fridge Life? 3 days
Freezable? 3 months

Serving: 1gCalories: 84kcalCarbohydrates: 20gProtein: 2gFat: 1gSaturated Fat: 1gPolyunsaturated Fat: 1gMonounsaturated Fat: 1gSodium: 65mgPotassium: 332mgFiber: 4gSugar: 14gVitamin A: 73IUVitamin C: 12mgCalcium: 18mgIron: 1mg
Tried this recipe?Let us know how it was!
« Why Can Babies Be Keto (and Why They Shouldn't)
The Healthiest Banana Bread »

Created by two sisters, we bring together nutritional expertise, delicious recipes, and a desire to make life easier for parents everywhere without sacrificing healthy food Read more about us!

This is so much more than a recipe book. This is a full weaning plan written by a PhD nutritionist for your child's entire first year, based on the latest science. This will take away the mental load of wondering if you're feeding your child the right food. It's what we wish we had when we were weaning our own children.